“Impulsive! Randomly impulsive!”, that’s what I think when I suddenly decide to take the bus to a small town directly after work on Friday. I have no plans, no toothbrush, no hiking booths, no extra clothes, but the weekend had started and to get to my own village from Seville is about 1 hour, while getting to this apparently amazing town, Ronda, is two hours. … and I am in Spain and healthy and have enough money to get me there and no plans for the evening, so who cares if I don’t have a toothbrush!

I get on the last bus for the 2 hour ride. The bus takes off into the night and 2 hours later, I’m in Ronda. I manage to find a nice and affordable hotel in the middle of the city and rent a small room, walk down the street to a spectacular bridge and then head back to the hotel feeling tired and a bit confused about my decision, it is too dark to see anything and the bus ride was also in darkness, maybe I should have stayed back in Seville! But I managed to find a toothbrush and I sleep early.

The next morning, it is raining! Damn, I was planning to go for a hike or at least a walk around town. I decide to get up and out anyway, and as I do a beautiful thing happens: the clouds start parting for a short bit. The streets are empty and I walk to one of the most spectacular sights I have ever seen: two towns built on huge boulders and connected by a massive bridge. It is unbelievable and the sun shines for a moment too and I am in heaven!

Ronda is an ancient town: it was occupied by the Romans and then over time became an important Muslim stronghold before being retaken by Christians. Over time, it has attracted many writers and artists including Ernst Hemingway. When I was reading the description of the town in the guidebook, suddenly, I remembered a shocking passage in “For Whom the Bell Tolls” where in a small Spanish town (Ronda, as it turns out), during the Spanish Civil War, the fascists of a small village were rounded up in a town square which was close to a cliff. They were beaten and then had to walk between two lines of villagers to their fall into the valley below. This shocking story is unfortunately true and it did happen in Ronda, in the same square that I am sitting in now (Plaza de Espania).

Looking down the cliff from Puente Nuevo is terrifying and also fantastic. When I cross it, I enter the beautiful old town. My running shoes are slippery and dangerous for walking on the wet road here, so I slow down but in the end manage to take a short historic walk (based on one recommended by the tourist office and beautiful described in relation to trees and the landscape) around and outside town. I first visit an abandoned palace (Casa del Rey Moro) with beautiful gardens and a long (again wet and dangerous) staircase to the very bottom of the cliff. It is a fantastic view from down here and legend has it that this was a hidden bathing spot for the sultan’s wives in the past.

Up on the cliff again, I walk down to the ancient Banos Arab (Arab baths) and the ruins of two windmills. Walking on a smaller bridge, I get to ancient farmhouses where pomegranate trees are growing and time seems to have stood still. I walk back to the city and head to the final spot to see before departure: the private Museo Lara (www.meuseolara.com). 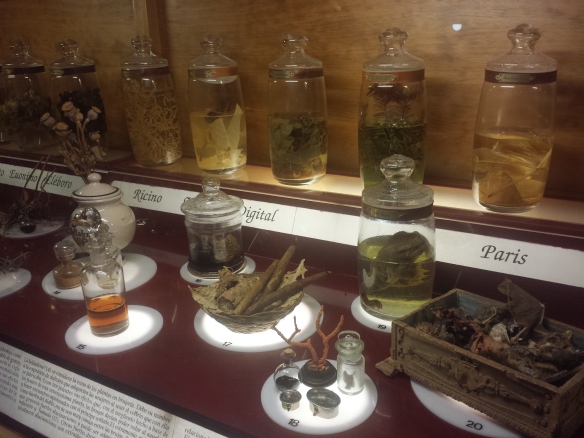 Collecting interesting objects from clocks to guns to pipes to microscopes to Medieval torture instruments to witches tools, it the passion (and obsession) of the owner of this collection. It’s fun and quirky museum that I enjoy very much. The ride back to Seville is fantastic: what I had missed on the previous evening because of darkness, I see now: expanses of mountainous scenery dotted with farmhouses and ruins. I get back to the same station I impulsively took off the previous day, grateful for the adventurous pushing spirit in me that sometimes takes over when I am indecisive!